The Bahamas, in the aftermath of Hurricane Dorian, can either reset by making radical reforms to reduce the risks and impacts of climate change, or squander this opportunity by rebuilding on Abaco and Grand Bahama

Browse our collection of various documents

Browse our collection of various opinions 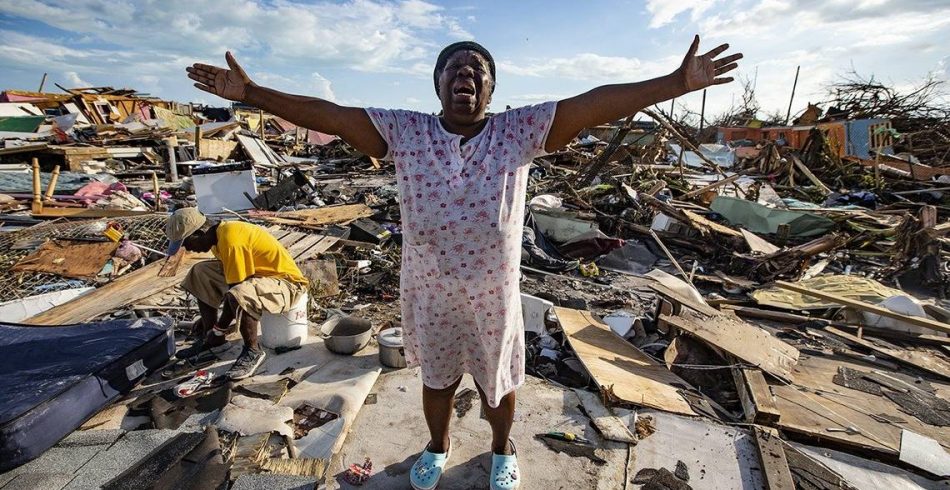 The Bahamas, in the aftermath of Hurricane Dorian, can either reset by making radical reforms to reduce the risks and impacts of climate change, or squander this opportunity by rebuilding on Abaco and Grand Bahama in the same places, in the same manner to the detriment of our children, future generations and a resilient and sustainable future.

In part one of this series, I will review the failure of state agencies to prepare, protect, evacuate and provide timely humanitarian support for the people of Abaco and Grand Bahama and the extraordinary response of Bahamian civil society, regional and international humanitarian responses and the need for more collaborative private-public partnerships in disaster preparedness, rescue, evacuation, resettlement and restoration. In part two, I will examine the economic and non-economic damage and loss suffered by The Bahamas and the continuing vulnerabilities of the capital city, Nassau; and in part three, I will recommend a number of measures that The Bahamas should pursue in order to build a climate-resilient country.

Derek Walcott, the St. Lucian poet and Nobel Laureate, reminds us of the resilience and survival capacity of people in this region to renew, adapt and transform through the harshness of natural and human-made disasters of the Middle Passage, plantation slavery and post-colonial subjection in this region:

“. . . the tribe in bondage learned to fortify itself by the cunning assimilation of the religion of the Old

World. What seemed to be surrender was redemption.

“What seemed the loss of tradition was its renewal.

“What seemed the death of faith was it rebirth.”

The existential threats of global warming producing more intense and frequent hurricanes and natural phenomena challenge The Bahamas to renew, adapt and make radical reforms to its governance structures, economy and social safety infrastructure to survive and ensure a more resilient future.

On September 1, 2019, Hurricane Dorian made landfall on Abaco and the Abaco cays, with maximum sustained winds of 185 miles per hour, gusts of 220 miles per hour and 20 to 25-foot storm surge flooding communities and businesses, causing significant loss of life (officially at 70), and some 282 missing persons; catastrophic damage to properties and businesses, bringing economic activity to a halt on Abaco and the Abaco cays.

On September 2, 2019, Hurricane Dorian, as a Category 5, moved over the eastern side of Grand Bahama, sitting over Grand Bahama until September 3, 2019, causing storm surge and flooding up to 20 feet, from the north and northeast towards the south of the island, destroying the Rand Hospital, the domestic and international airport and compromising the water table by saltwater surge. During Dorian, about 100,000 barrels of oil (five million gallons) spilled from the Norwegian company Equinor ASA’s South Riding Point facility in East Grand Bahama, according to the Minister of the Environment Romauld Ferreira. Waterkeepers Bahamas, Save the Bays and Waterkeeper Alliance, after reviewing water samples within a mile of the facility on September 23 and 25, assert that this oil spill has contaminated vital pine forests, mangroves and wetlands in East Grand Bahama that provide a critical ocean buffer for Grand Bahama, habitats for migratory birds and a cleansing mechanism for the scarce groundwater.

About 29,472 persons were affected by Dorian in terms of damage to their homes and assets. Nine thousand homes and in excess of 11 million square feet of structures have sustained some damage on the two islands.

The Bahamas, like other small island states, is least responsible for global warming. However, The Bahamas is most easily devastated by rising seas and harsher storms.

Hurricane Dorian demonstrated the urgent need for a national reset in The Bahamas. The failure of certain state functions before, during and after the hurricane is contrasted by the extraordinary and heroic response of Bahamian civil society and the regional and international community. The outpouring of domestic, regional and international humanitarian support affords The Bahamas a unique opportunity, if the government is nimble, to mobilize domestic, regional and international resources, funding, goodwill, expertise and talent to effect a transformational strategy to become a climate-resilient nation, as Dominica did after it was devastated by Hurricane Maria on September 18, 2017, and as Fiji did after Tropical Cyclone Winston destroyed 20 percent of its GDP in 2016. Dorian revealed the tenuous nature of the social contract between the Bahamian citizen and the Bahamian state.

Hurricane Dorian tested the social contract between the Bahamian citizens on Abaco and Grand Bahama, indeed all Bahamians, and the Bahamian state. Before, during and in the aftermath of Hurricane Dorian, there appears to have been a failure of vital state machinery charged with disaster preparedness, safe shelters, public protection, food and water reserves, evacuation, rescue and relocation support, in breach of this social contract. The social contract between Bahamian citizens and the Bahamian state, based on the Constitution, United Nations Charter and other humanitarian international conventions, requires from citizens duties of loyalty, allegiance and obligation to pay taxes to the Bahamian state in exchange for the state’s protection, maintenance of the rule of law and the provision of social security. For example, there seems to have been a failure to mobilize the 100 percent state owned national airline, Bahamasair, to undertake emergency humanitarian evacuation flights from Abaco and Grand Bahama until about six days after the disaster when it was announced that Bahamasair would transport passengers from Abaco and Grand Bahama without charge. Mailboats, about 90 percent of which are subsidized by the government, were not requisitioned into humanitarian evacuation of residents from Abaco and Grand Bahama. In the immediate response stage, most rescues, during and in the immediate aftermath of the hurricane, were carried out by private citizens, who mobilized their jet skis, large vehicles, tractors and boats to rescue residents. Similarly, most evacuations were carried out by private sector corporate citizens, non-profit organizations and international humanitarian partners, especially the United States Coast Guard and National Guard helicopters who evacuated injured and vulnerable persons. The clearance of humanitarian supplies, equipment and volunteers from regional and international partners was challenged by the absence of clear protocols for emergency clearance of supplies and volunteers. Evacuees, apart from those who were evacuated through Odyssey Airport, who came through Lynden Pindling Airport, Jet Aviation and the various docks in Nassau, were not processed upon arrival, making it difficult to get humanitarian supplies and support to them in a timely manner, as many of them in desperate need for shelter and support traveled outside of The Bahamas or other islands to family and friends.

The contribution of the Bahamian civil society and the regional and international community demonstrates the vital importance of private-public partnership in building resilience in disaster preparedness, evacuation, rescue, resettlement and restoration systems.

Bahamian civil society became community keepers during and after Hurricane Dorian. Private citizens and businesses, together with NEMA and local and international NGOs, came together in a hangar at Odyssey Aviation in Nassau to collaborate and organize an immediate response to catastrophic national emergency resulting from Hurricane Dorian, providing an air-bridge between Abaco and Grand Bahama to Nassau, an evacuation center, disaster relief logistics, triage station and evacuation welcome center where evacuees were registered, treated and provided with housing.

Next door, at Jet Aviation, private citizens and corporate citizens, volunteer pilots, plane owners and private charterers organized a continuous air-chain of chartered flights taking supplies to and evacuating persons out of Abaco and Grand Bahama. Similarly, private local and foreign boat owners organized a sea-chain to take humanitarian supplies to and evacuate persons from Abaco and Grand Bahama.

On Eleuthera, the One Eleuthera Foundation, of which I am the current chairman, along with partner organizations, with volunteer plans, helicopters and fishing vessels from Spanish Wells organized evacuation of over 2,000 persons from Abaco to Eleuthera, provided housing, food, supplies and counseling, jobs and placement of the students in school. Currently, the One Eleuthera Foundation and the Centre for Technology and Innovation is housing, feeding, counseling and supporting 600 evacuees from Abaco and Grand Bahama.

More state bureaucracy is not the answer to building a climate-resilient country. According to the United Nations Office for Disaster Risk Reduction, in a study entitled “Governance in Disaster Risk Management”, the most effective disaster risk reduction strategy is strong stakeholder involvement, cooperation and collaboration, with decision-making powers and adequate funding. The international consensus, according to a report by the United Nations Office for Disaster Risk Reduction, is that, “Vertical and horizontal cooperation amongst government agencies, public-private partnerships and multi-stakeholder participation and awareness are now deemed necessary to succeed to reducing disaster risk.” A strong Bahamian civil society, nonprofit sector, effective local government, regional and international partners working collaboratively with the government, a multi-stakeholder collaboration, is the best way to ensure a climate-resilient country.

Will the Bahamas seize this opportunity to reset or squander this chance to become a climate-resilient nation to ensure our survival through more intense and frequent hurricanes in the future?